There are nine spectators in the gallery of the Queen Elizabeth Hall, albeit socially distanced. From the looks of it they are of kin to Black Country, New Road, this evening’s musical guests. After all, one of them looks like Charlie Wayne’s doppelgänger, and another, for certain is Lewis Evans’ girlfriend. During a debut live performance of ‘Track X’ i’m sold by this theory. I can’t imagine a venue worker (in the other 7) feeling just as engaged as this lot are. The enneagon rise piously and provide backing vocals, microphone in hands. This evident ambition in not creating the ‘same old’ livestream is difficult, but BCNR’s attempt is interesting, and incredibly human in doing so. It is to be noted that these spectators ocassionally go off key, and perfection will always be too clinical for a group like this. This is the second stream BCNR have done since releasing ‘For The First Time‘. The first having no album promo. Just an opaque (though strangely brilliant) set of jams, with an MGMT cover thrown in for good measure. That stream looked as if it was recorded on an ancient VHS camcorder. A shock in comparison to the vibrantly modern looking Southbank stream. 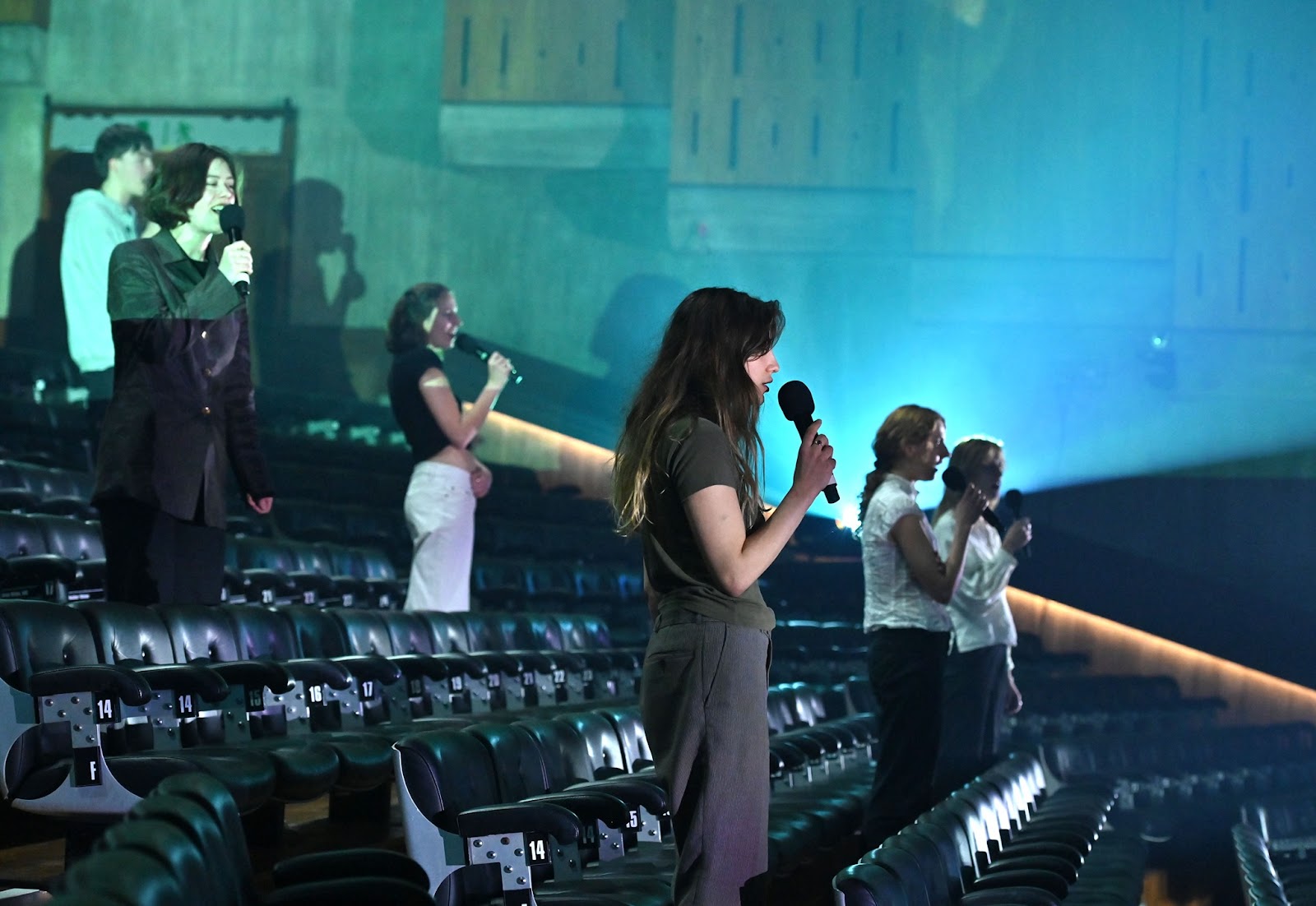 I won’t put makeup and lipstick on the truth about this though. I really hope death gets the last word on the live stream. When they’re this good it should be illegal. Sitting on my bed with a can of lager, haunted by thoughts that I need to clean my laptop screen just isn’t cutting it anymore. I almost miss photographers getting in my way every two seconds, or the time my bagged up Bulgakov novel got taken advantage of, and you would too having seen this, even if you have social phobia. Here we see Black Country, New Road in a stage of immense growth, and I’m not just talking about their hairstyles (a viewer humorously notes that Luke Mark looks like Al Pacinno these days, and Isaac Wood the lego man). I’m talking about a new phase of confidence.

In a performance of Science Fair, Isaac Wood stalks the stage propelling his guitar like Penellope’s suitors trying to restring Odysseus’s bow. The group soundtrack this with expected bleeding illicit noise jams. Noisier than those found on the LP. This is later to be uncovered by a confident shout, replacing the uncertain quiver we are used to. Peaking at number 4 on the UK album charts can make you feel indomitable I guess. BCNR showcase this confidence in performing all 6 album numbers in chronicle faultlessly. Just like the album, yet with more risks. Sure, highlights still include Ellery and Evans having instrumental arguments on ‘Opus’ and ‘Instrumental’, Hyde’s hypnotic basslines and Wayne’s unbelievable drumming for instance, but what really stands out is the evolution of the songs. Whether it comes in form of ditching the second leg of Sunglasses, to be replaced with a murky demi gloom of musical quicksand, or the newly decorated version of ‘Athen’s France’, featuring guitars that ‘twinkle’, Marquee Moon style. Also now incorporating a movement where percussion is entirely removed, ripping the carpet to find yet more textural treasure underneath.

This band and a few others have been famous in my eyes for bringing back the outlaw art of bootlegging. At one gig I was at pre lockdown, someone caught an unreleased song ‘Basketball Shoes’ on tape and spread it over the internet. A cold recording, complete with coughing and talking. Previous gig goers will be glad to know a warmed up version appears in HQ on this stream, probably about to be posted on YouTube a hundred times to the annoyance of label workers. What was a 14 minute love letter to Charli XCX is now polished up with a stronger set of lyrics and instrumentation, while still keeping intact the ziggurats of guitar noise that pop in mid way through the piece. It’s a sign of a band not slowing down. Mark plays on the cut with a double necked guitar that he probably gambled with Jimmy Page to get. May also incorporates spacey sections that do the track wonders, now played on piano instead of synthesiser. 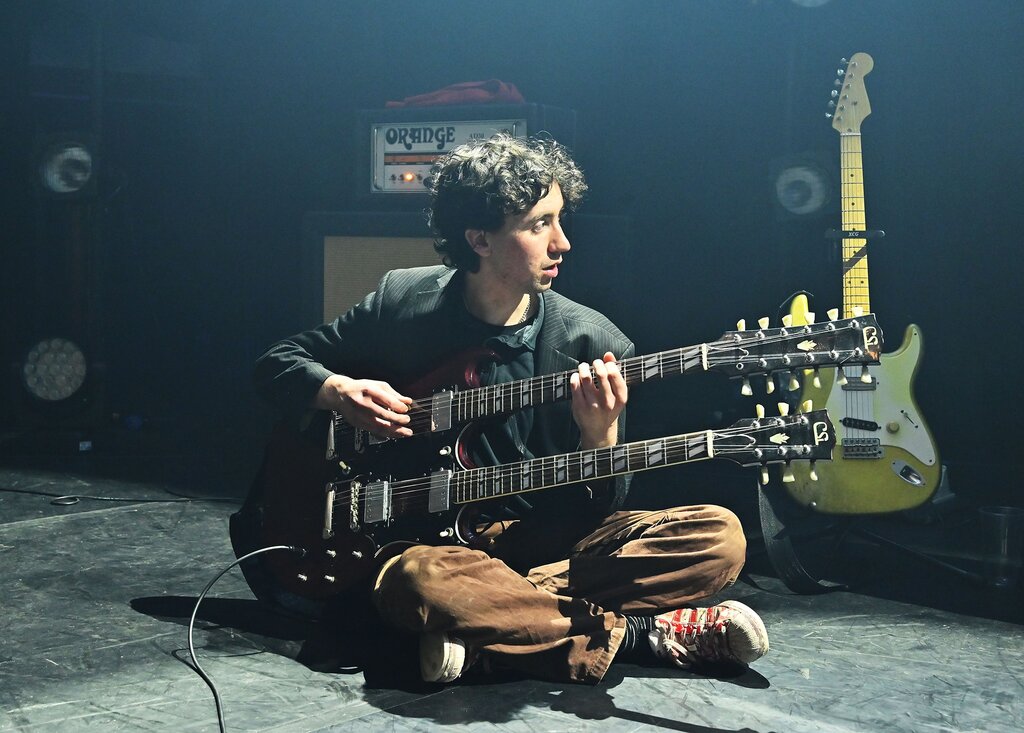 A new song entitled ‘Bread Song’ also pleases. Incorporating maybe their most focused lyrical narrative yet, now over what sounds like Funeral era Arcade Fire. The group showcase a subdued version of themselves as Wood plucks at an acoustic guitar, and Wayne somehow confirms putting a tea towel over his drum kit can make it sound atmospheric. A hollow sound is formed, sounding like someone a room away chiselling to try and get through. That gets my applause here.

The band open up with yet another new song. A beautifully composed instrumental called ‘Marks Theme’, with pentatonic undercurrents, said by Evans to be a tribute to his father on a social media post.

It speaks volumes to see a band play in one virtual dimension rather than three, yet still think they’ve potentially given their best performance yet. In over an hour they can make time stop, and that is far and few between in bands. It’s a wonder to think of what it’s like there in the flesh. Something soon to be witnessed again.

Go to Appearance > Customize > Subscribe Pop-up to set this up.
We use cookies to ensure that we give you the best experience on our website. If you continue to use this site we will assume that you are happy with it.Ok